I’ve been doing quite the bunch of studio stuff over the last couple of months, here’s a little taste about what’s going on:

– The mix for the upcoming Darius-album has been finished by october, mastering has been handled by the great Magnus Lindberg. Close to zero edits, no sampling, just a cool band hitting hard. Good times.

– Swiss death metal masters Anachronism have been uploading a bunch of studio clips right here: #1 / #2. There’s also a teaser with raw/unmixed audio, check that out here. I am currently in the process of finalizing the mix, mastering will be handled by the great Serge Spiga.

– Just before I headed out on tour, I tracked two days worth of live prog rock by Cutty Sark, featuring drums, bass, guitars and keyboards, all in the same room. Loved doing this! Live tracking always forces me to go for the most intense take, not the cleanest one. Currently finishing the mixes, here, too. Mastering will be done by me, this time around.

– Haut&Court’s new album «Troffea», which I mastered, should be out soon, Metalsucks just premiered the first track off of it – Go here to check out «Hienes».

I am currently preparing to track new stuff by Operation Blockhead, Redheads Are Vampires, Todos Destinos, and a few more, so watch this space for studio-scoops, more songs, etc.!

(Getting dem tones for Redheads Are Vampires)

Barely got home from a proper round of touring with the fine gents from Aborted pretty much all over europe. Did the mistake of adding a bunch of local shows, and pushing my ears too far, so I had to do quite the long break around christmas/beginning of january before I could pick things up. Lots of studio time ahead now, I’ll keep you posted about all things that are happening!

In the mean time, here’s some info on the tour/setup we did:
Support came from the great Origin, Exhumed and Miasmal, we shared one backline, pretty much everybody was super rad and down to earth. No weird situations, even though we basically were 24 people crammed into one tight nightliner. Also, got to work with the ever so great Patrick Häberli (Lights/TM), and Selina (Merch), so we our very own swiss crew thing going on.

We had some super cool backline, including Aborted’s Pearl Touring-Kit, EVH-guitar heads and cabs, and an Ampeg/SVT bass rig.
Mic-wise I had my own set with me, nothing out of the ordinary though. Besides the usual set of Sm57/e604 on snare, e604 on toms, and a triggered kick, I used my trusty NT5s on hat/splash, an AT E3000 on ride, and a combination of e906 and AT E3000 on guitars – The ATs are super cool on pretty much everything I ever tried them on… Already did a bunch of toms with them too, pretty neat for this kind of music.

I also brought out a little rack, with a SPL DynaMaxx for FOH L/R and two DBX 160x for bass and vocals, which proved handy in a lot of situations – Either I could balance out some clubs’ cheap gear, or simply add a bit of sweetness to a already cool rig.

By the third show I also had my cues pretty much down. Nothing out of the ordinary here, just messed around with some chorus/short reverb on the lead vocals to fatten them up and spread them out a bit.

Can’t wait for the next shows to come up, always fun helming the desk for these guys! 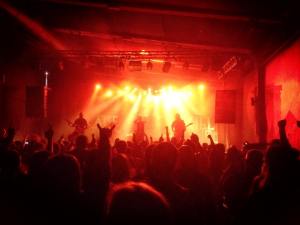 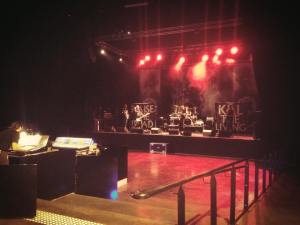